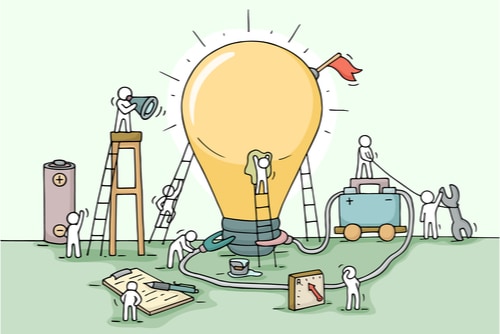 Midwest Marketing’s office is located just a baseball toss away from Mount Rushmore National Memorial (not actually but it is close by). As a matter of fact, some of our team members can actually see the world-famous carving from their homes! Mount Rushmore turns the Black Hills into one of the most patriotic places in America. Millions of people flock to the granite gates every year to get a glimpse of the Presidents and a large chunk of those plan their trip for the 4th of July.

So we thought, since we live in a place of patriotic pride and Independence Day is near, that we would look at some uniquely American inventions and how they contributed to the world of marketing:

A fellow by the name of Ray Tomlinson invented a way to send text-based messages that he called electronic mail, or email as we all know it. I’m not entirely sure what the American, or for that matter the world workplace would look like without email. For Pete’s sake, once I finish this blog I’m going to email it around the office for people to proofread! So thanks Ray for email and making sure that the @ symbol never goes out of style!

The program that 90% of graphic design work is done on is an American invention. The Knoll brothers created Photoshop in 1990 and was purchased by another company and then finally landed with Adobe when they realized the potential of the software. If you aren’t familiar with Photoshop, all you need to know is that the beautiful artwork that our Midwest designers put together, most of the magic happens in Photoshop!

Holy smokes, where to begin with this one. Google is king of the world, literally! In a world dominated by the internet, Google is the most used search engine in the every single country in the world. Starting out as a primitive “crawler” in 1996, Google has continued to grow and expand into one of the most successful companies ever.

There is one common denominator between every single office in America, when you walk in your guaranteed to see a bunch of overly bright colored square notes stuck to everything. These ladies and gentlemen are the Post-It Note (or sticky note). Invented in 1974, this little notes have been keeping marketers and other office people organized ever since. As a matter of fact I have one stuck to my computer right now, and if I had to bet I’d say you’re in close proximity to one as well!

While this is just a short list of office changing inventions, there are many more that we just don’t have time to get into. Like the swivel chair, the personal computer, or even the Roomba! So next time you send an email to Tim in accounting or write down a to-do list on a Post-It note, you’ll know a little more! Happy 4th of July!