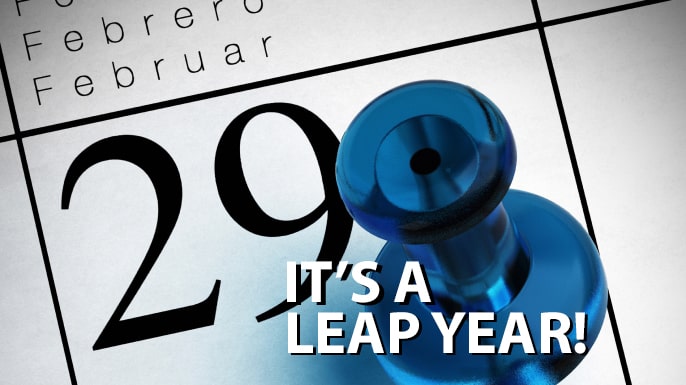 It’s a Leap Year! I’m sure this is very exciting for all you Leap Day babies out there. I mean you actually get to celebrate your birthday, on your birthday! I’m sure some on you are wondering, what is a leap year and why do we even have a Leap Year?

A leap year is a year that contains one additional day that is added to keep the calendar year synchronized with the astronomical or seasonal year. Seasons and astronomical events do not repeat in a whole number of days. The Earth year actually takes 365.2422 days, give or take. So by inserting an additional day into the year the drift that happens over time is corrected.

Now that we know what a leap year is and why we have a leap day, here are some interesting facts about leap day:

• The formula for calculating which years do and don’t have Leap Days is more complicated than you might realize.

• Most of us won’t ever see a Leap Day skipped in our lifetimes.

• It is believed, babies born on leap year have unusual talents.

• Explorer Christopher Columbus used the lunar eclipse of February 29, 1504 to his advantage during his final trip to the West Indies. After several months of being stranded with his crew on the island of Jamaica, relations with the indigenous population broke down and they refused to continue helping with food and provisions. Columbus, knowing a lunar eclipse was due, consulted his almanac and then gathered the native chiefs on February 29th. He told that God was to punish them by painting the Moon red. During the eclipse, he said that God would withdraw the punishment if they started co-operating again. The panicked chiefs agreed and the Moon began emerging from its shadow.

So to all you Leap Day babies, the team here at Midwest Marketing wishes you a Happy Birthday! And to everyone else, we hope that this is and continues to be an outstanding year for you, especially since it’s a day longer than most years!