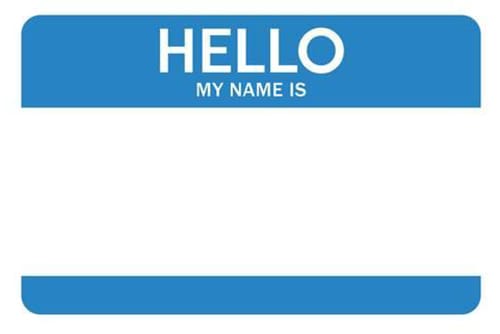 As I grow old, my time for sitting in quiet contemplation with my thoughts seems to run into the hustle and bustle of everyday life. Although, when I do get these moments, they are all the more glorious. My thinking consists of a wide variety of topics from current political happenings to if you looked out your window and saw one bigfoot and then another bigfoot was with that first bigfoot what would you call them as a pair? I think they would be called bigfoots, or maybe bigfeet, either way, it’s beside the point. One thought that consistently occupies my brain space is, “do people grow into the names they are given or are people given the name that fits their personality?”

Our names define us, literally, they are one or two-word definitions of who we are. When someone asks, “who are you?” We typically respond with our name because that is easier than explaining who we are on a philosophical level. Many names have graced the pages of history books such as Theodore Roosevelt, Albert Einstein, Queen Elizabeth, and Christopher Columbus. Although two names seem to be more profound than all the others (possibly by sheer accessibility). If you ask anyone who is awake if they know anyone by the last name of Smith or Johnson the answer is going to be yes.

In the United States, Smith clocks in as the most popular last name around. If you look at the record books people named Smith has been making waves for many years. John Smith (the guy from Pocahontas) was a famous English explorer who played an important role in the settlement of Jamestown. Joseph Smith, who published the Book of Mormon at the mere age of 24. Bringing us back into modern time we have Dallas Cowboys running back Emmitt Smith and don’t forget about the Fresh Prince of Bel Aire, Mr. Will Smith.

While Smith takes the cake for most popular not far behind in second place is Johnson. Johnson gets to claim celebrities such as Magic Johnson the Los Angeles Lakers star point guard. The 37th president of the United States Lyndon B. Johnson or as many people refers to him, LBJ. There is even a tax act called the Dingell-Johnson Act (I would have named it something different but whatever) that puts an excise tax on all fishing equipment. Let’s not forget the rock (pun intended) that the Johnsons stand on, Dwayne (The Rock) Johnson.

While this is all fine and dandy none of these influential people can hold a candle to one of Midwest Marketing’s very own. Rachel, our Account Coordinator gets to claim both of the most popular last names as her own. Up until the point when she found the love of her life, Rachel was known by all as Rachel Smith. Toting around such a popular last name can be very burdensome so she decided that she better switch it up. That’s when she found Dawson, Dawson Johnson.

While Rachel may have experience with the two most popular last names around, she is also a kickass marketing professional who can help you with anything you would ever need. So, stop in and meet Rachel or if you have an official answer to my bigfoot question please come by and tell because it’s driving me crazy!