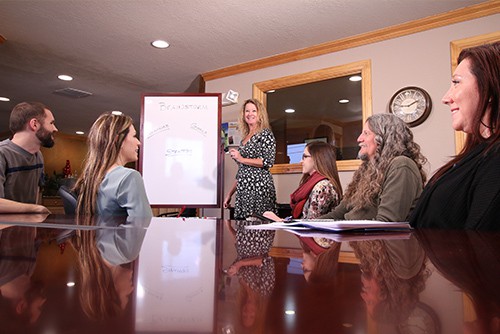 We’re in The People Business

I’ve been fascinated with music for as long as my mind can remember. There has always been something about the sound waves coming out of grandpa’s rusty old farm truck radio that connected with me on a deeper level than I ever knew was possible. As grandpa would teach me how to drive we would listen to sounds of country gold out of the speakers, from the likes of Waylon Jennings, George Jones and the great Merle Haggard. We would rattle down the road with the crank windows rolled low, singing along as I tried my best to avoid the fence in the ditch. All the while with a smile of contentment spreading across my face.

As my love of music grew I picked up a guitar in hopes of becoming the next George Strait. I attempted to learn how to pick and strum my cheap six-string piece of wood and after years of practice I became a halfway decent guitar player. Although as I would play, I also began to wonder how musicians could get on stage night after night and sing the same songs over and over again. I could not seem to figure out how these musicians went through the same routine over and over again and seem to love every minute of it. Because of this reason I became, for lack of a better term, “bored” with music and put my guitar away for several years.

The years rolled by as I never so much as played a note and the strings became good at collecting dust. One evening I looked at my old guitar and decided that I at least needed to wipe the dust away. I picked it up, cleaned it off and just for old times’ sake played a few songs. I immediately fell back in love with the music that I heard so long ago in grandpa’s truck. Although, I could still not shake the feeling of being stuck in the mud and not being able to get out of the same routine.

As I headed down the road in my own rusty truck I listened to the radio just like grandpa taught me to do. When the DJ interviewing Garth Brooks asked the very question that I had been looking to answer for all these years. “Does the music industry ever get old playing shows night after night?” the DJ asked. As I sat on the edge of my seat, Garth without hesitation said the words that made me see things in a different light, “I’m not in the music industry, I’m in the people industry.”

There is no music industry, restaurant industry or healthcare industry. There is only one industry and that is the people industry, because in any business what matters is the people. Garth Brooks can sing the same songs night after night because the people want to hear “Friends in Low Places” night after night. It’s all about putting a smile on a person’s face and knowing that you are making a positive impact in somebody else’s life. Business is no different, people care less about what is on the shelves and more about the kind of people that are behind the name tags. One person making a positive impact in another person’s life, well I can’t think of a better business than that.

Here at Midwest Marketing we are not in the marketing business, we are in the people business. It’s what we were founded on and what we strive for every single day when we unlock the doors and go to work for you, the people. If you want to be a part of our people business, get in contact with us today and don’t miss out on your chance to become greater than.