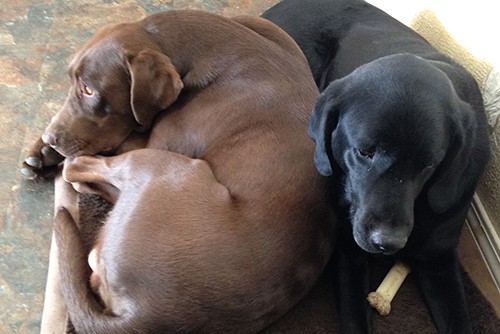 The car came to a stop in the driveway. It has been an exceptionally long day and everyone on board was tired. We had left early in the morning for a trip to Steele, North Dakota, planning to meet up with a friend. As I unbuckled my seat belt, I glanced at the odometer to see just how far we had driven that day. As I looked at the numbers, my blood went cold. No, that couldn’t be right. The odometer said 666 miles…was it an omen?

I looked in the back seat and there was the reason for our trip. The cute little chocolate body sprawled out in his crate, paws in the air and pink belly just begging for someone to scratch it. He was so cute and so BIG! His paws were enormous and Kevin, our friend that gifted us this bundle of fuzz, had told us this was the second biggest male of the litter and his sire was a big boy and a brother from a previous litter was over 100 pounds. What had we gotten ourselves into?

We had arrived in Steele before Kevin did and waited, somewhat patiently, to meet our new puppy. A name had already been picked out for this basically sight unseen baby. Maverick. His name would be Maverick. It was different and just seemed to stick, even before we me him. I have never before named a puppy before I met it and wondered what would happen if the name didn’t fit. Fortunately, or perhaps unfortunately, it fit perfectly.

When Kevin arrived, he got out of the car with a little chocolate piglet. It was love at first sight, as it usually is with any four-legged baby. The little piglet was so chubby he grunted and groaned as I struggled to wrap my arms around the three-month-old baby that looked half grown. We chatted for a bit, let Maverick wander around and potty and loaded him up, said our goodbyes and headed for home.

A quick stop in Bismarck to get a couple of toys and some puppy chow and we were set. Have you ever tried to drive forward and look backward at a cute puppy in the backseat? It’s not easy. He was adorable. Rolling around with his new toys and those amber eyes so innocent and wide. We stopped a few times along the way for a break and to let Maverick out to stretch and potty. It was nearly dark when we finally arrived home.

Boomer and Beau, our other two black labs, were at home awaiting the new arrival. Beau was in his twilight years and not much for puppy shenanigans. Boomer, at seven years old, had always been the baby. He didn’t know what to think about the new arrival. It chewed on him, rolled on him and barked at him. Maverick tried the same with Beau, but one good bark and lunging nip and Maverick got the message to give him a wide berth. Boomer missed that memo, something I am sure he regrets doing to this day.

After a mostly sleepless night due to Maverick whining and crying, the sun came up on our first full day with our new baby. We were going to do this one right, work with him day in and day out right from the start. After having numerous foster dogs go through our home, it was refreshing to have a blank slate to work with. We had that opportunity with Boomer and he had matured into a fantastic companion and super pheasant hunting dog. We had the same hopes for Maverick.

Remember that odometer reading? The 666…how I wish I had just started up the car and driven another mile. Perhaps it might have changed the course of history. And naming the puppy without meeting him first? Yup, it was no coincidence that his name is Maverick. He lives up to what one would assume is a maverick puppy.

Maverick is now 11 months old. He weighs in around 78 pounds and he is far from done growing. Beau has since crossed the Rainbow Bridge, leaving Boomer to deal with the demon spawn all by himself. He has not handled it very well. He acts like he has been whipped a thousand times and has turned into a meek, tail tucking shell of his former self.

Maverick is the alpha male in every sense of the word. He is bossy, sassy and just plain stubborn at times. He is infuriating when you call him and he just stands there and stares at you with those beautiful amber eyes. He has the longest legs and that skinny body that comes with a growing adolescent. He has a devil may care attitude and just chooses to ignore you.

He is incredibly smart, so smart that I think he finds us all very boring, hence his Houdini antics. He is a thief. He silently steals anything left lying around. Socks are his favorite subject, but the cat food spoon is a close second. He is tall enough he can reach things on the counter without even jumping up. But he does like to put his feet on the counter, just so he can see eye to eye with the cats while he tries to eat their food. He will grab his treasures and head to the bedroom so he can jump on the bed while you run from side to side trying to catch him. The day he finally managed to jump on the bed was the day I knew I was doomed.

He likes the cats, so much so that he tries to eat them on a regular basis. I’m sure he’s just playing when he puts his mouth over their heads. At least I hope it’s just play. He has no fear of the horses and will walk right up to sniff them…noses, legs, whatever. He doesn’t care. My heart cannot take the anxiety of trying to watch this toddler on four legs as he navigates the world without fear.

He knows a lot of commands, but choses to ignore most of them. He eats enough food for a horse and has an amazing ability to let you know exactly when it’s time to eat and you better drop what you are doing and get him fed. He has been hunting pheasants once and did very well, but it didn’t really wear him out. He can run for miles and just gets warmed up.

His favorite toy is his stick. It’s actually a broken wooden fence post, but for him, it’s a stick. He has it in his mouth all the time when he is outside. That’s a good thing, as it keeps him from chewing on Boomer. He doesn’t just chew either, he grabs Boomer’ loose skin around his neck and face and hangs on and drags him. Boomer is currently sporting a swollen face and neck thanks to Maverick’s efforts. If given the chance, I think Boomer would gladly run away from home just to escape his housemate.

It’s hard not to laugh at Maverick sometimes. He is a total clown, loves you even when you want to throttle him and has a way of sucking up that makes you forgive all his naughty behavior. We have lost a few dog beds, some toilet paper, paper towels, lots of dog toys, and countless other objects we never could identify. He doesn’t like to cuddle, but he likes to sniff you. He rides shotgun in the car, with his front paws on the console, his big head in the way and his nostrils in your hair or ear, whichever suits him at the time. He can’t sit still, could use some ADHD meds and the humans that live with him could use some valium at times. He knows no personal boundaries and will even stick his head in the refrigerator or cabinets when they are open.

I’m not sure if it’s my age or perhaps the seven year span between puppies, but Maverick seems to take joy in wreaking havoc and leaving a trail of destruction in his wake. It’s hard to stay mad at him and I keep telling myself it’s my fault for not working with him more through those formative puppy months. However, there is a part of me that thinks he is just super smart and will always have the upper hand. In other words, we live in Maverick’s world and he rules. He just flat wears us out, day in and day out.

I just read somewhere about chocolate labs are notorious for their devil-may-care attitude and naughty ways. I sure wish I had read that before that fateful trip this past July. All the signs were there and I chose to ignore them and now we have the demon dog. But I still love him…most of the time!