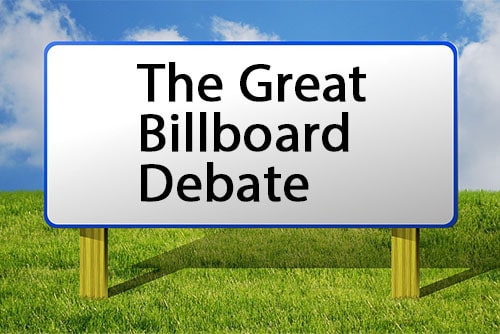 As you drive west along Interstate 90 towards the beautiful Black Hills that we here at Midwest Marketing call home, you see a wide variety of billboards. A majority of those boards are telling you to stop at this place called Wall Drug. Wall Drug located in Wall, South Dakota has arguably one of the greatest billboard advertising campaigns of all time. While many claim the historic drug store to be the king of tourist traps, the combination of billboards and free ice water keep bringing people into town.

Billboards are often looked down upon in today’s marketing environment and are said to be not as effective as other forms of advertisement. Although businesses such as Wall Drug and others seem to find success in the signs. So we’re going to look at some pros and cons of billboard advertising and see if you think it could be right for your business, or if you would rather leave the boards behind.

As Americans, we are always on the move and most of the time that moving is done behind the wheel of a vehicle. According to a study conducted by the American Driving Survey, the average American spends around 20 hours in their vehicles each week, which equals about 200 miles of travels in a week and 10,400 miles in one year. So we spend enough time on the road in front of billboards, but do we really pay attention to them? According to several different studies that answer is, yes. 71% of people surveyed said that they consciously look at billboard messages while driving.

Billboards defiantly have the ability to grab someone’s attention and leave a memorable impression, but they do come with a hefty price tag. The largest downfall of billboard advertising is how much it can cost. The cost of renting a billboard greatly depends on the size of the board itself and the location that you are in. Billboards can range anywhere from $500 per month for smaller sizes, to $5,000 per month in larger metropolitan areas. Being one of the most expensive forms of advertising can turn people away from the billboards.

Whether or not billboard advertising is right for your business greatly depends on your marketing budget and the goal that you are trying to achieve. If you have some extra cash and are looking to increase brand awareness, then billboard advertising could be right up your alley. If you are trying to drive sales may be a cheaper alternative could get you better results.

If you are thinking about making the jump to billboard advertising, get in touch with us at Midwest Marketing and we would love to help you get started!